Inc. magazines editor, Leigh Buchanan, divides the evolution of leadership into three eras: the age of autocracy (ancient times to the 1980s), the age of empowerment (mid 1990s to mid 2000s) and the age of nurture (mid 2000s to the present).

My own learning and experience recognises all three of these styles and my personal business journey has experienced all three while often subconsciously trying to evolve and grow along the same path. I must say that it has at times been challenging but in the most part highly rewarding.

My business life started back in the 80s in the Steel and Automotive business where the ‘age of autocracy’ was well established and I ‘learnt’ that to succeed you had to be tough and ruthless. People like Larry Ellison “who pushed employees to the limit” and ‘neutron’ Jack Welch at General Electric “for his propensity to get rid of employees while leaving buildings intact” where heroes of the day.

People such as Howard Schultz the CEO of Starbucks embraced the age of empowerment by as Buchanan says “ rely on store-level employees making decisions based upon knowledge of their regions” along with Richard Branson who quoted “Clients do not come first. Employees come first. If you take care of your employees they will take care of the clients”..

In my experience it is because the five points above have not always been in place that the age of empowerment failed to deliver the step forward in leadership that it offered. It was not that many leaders weren’t genuine in their intentions to empower it was that the conditions were often not in place to allow it to succeed. This is never more turn in the need to let go of power (greed) which was at the heart of command and control forms of leadership styles, which I believe are less effective in todays business world in which  Bob Johansen observed “the younger generations want authenticity and transparency”. In a study done by UC Berkeley who followed 85 PhD’s over a forty year period it showed that “high emotional intelligence (EQ) was four times more important in determining professional success than IQ and training”.

My most recent experience of working in a ‘collaborative’ group where power, greed and jealousy had not been removed has been a perfect illustration and learning for me as to why the age of empowerment has not always delivered the benefits that it could and should have.

The greatest leader that I ever had the privilege of working with was Gottfried Thoma (an ex ????) who was the CEO in a number of British American Tobacco companies that I worked with and has now retired. I didn’t know at the time (late 90s/2000’s) why I thought what I did but I know now. Gottfried had embraced the age of nurture back then. I remember him saying to me “I know nothing about the cigarette industry” which of course was not true, he knew a lot. “I just surround myself with great people and inspire them to do great things” (humility!) also when conflict between India and Pakistan was close to breaking out (Gottfried was CEO of BAT Pakistan at the time) he refused to return to the safety of Corporate offices in London, stayed in Pakistan and set up temporary offices in his own home because it was a safer environment for his people. The results were also amazing, during his time in charge he turned BAT Pakistan from one of the worst performing BAT Operating Companies in to one of the best and he did it through ‘nurturing his people’. He even drew the organisation chart upside down with himself at the bottom and his people at the top, maybe just semantics but it said such a lot. 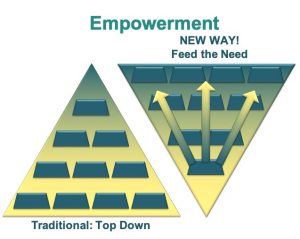 Leigh Buchanan asserts “the Chief Executive role is taking its place among the caring professions. It takes a tender person to lead a tough company”.

Gottfried was certainly a tender person leading a tough company in a tough industry.

The Future of IBP / S&OP